On the weekend of the 13th April 2019 the 47th Amsterdam Waterlands Canoe Marathon tool place. This race is part of the ICF World Series and showcased some world class talent with many familiar faces from the World Championships taking part. 13 Irish paddlers travelled to compete (7 Junior Men, 3 Junior Women, 1 Senior woman & 2 Masters Men). On arrival in Amsterdam we were greeting by very cold temperatures & a bitterly cold wind. On the Friday everyone met at Viking Canoe Club to get there boats (kindly towed over by Aaron Smith) & test out the portages. The 2nd portage on this race is unique in that the paddlers ramp up onto the bank before jumping out of their boats. There is no gradual slope to the bank so if it is got wrong you take a dip in the deep icy cold water.

On Saturday in very cold conditions the 24km race kicked off with about 100 boats lining up for the Senior Women, Masters Women, Junior Men & Masters Men race. The Senior men started 20 minutes later. Meanwhile further up the course the 14km started with about 20 boats taking part which included Junior Women & some Junior men, & Masters who felt the 14km was enough. The mass start made for some huge waves which a number of paddlers fell victim to. After 9km the 1st portage was reached as the field was starting to spread out into groups. About 5km further down the course was the 2nd portage and the practice the day before paid off for many of the Irish. The last 10km was partially mad eup of some very narrow canals which would struggle to fit 2 abreast. There were a series of tight 90 degree turns before finally reentering the large canal the race started on about 3 km from the end. 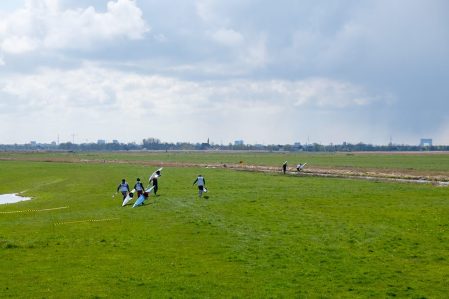 There was lots of great racing & lots of experienced gained for the Irish Juniors. The standout result was Áine white of Cebridge paddlers taking the Silver medal after a 14km battle with a French paddler. Áine had the lead coming into the finishing straight and was pipped at the post in a sprint finish with only a few meters to go. A great result & fantastic to see all the hard training paying off. Congratulations Áine & a huge well done to all the paddlers who took part. Hopefully next year we will see a good Irish group return to take part in the 48th Waterlands Marathon