Last week saw the Thomastown Paddlers due of Donnacha Brennan and Tadhg De Barra head to South Africa to take part in the legendary 3 day Dusi race. Lads finished in 55th place in 9 hrs 54 mins in total out of approx 400 finishing boats, comfortably placing them in the top 100. Below is the lads race report for each day. A huge well done on  to both of them on their result and hopefully this may inspire more Irish paddlers to make the trip and race in one of the worlds toughest races.

An early 6am start at Pietermarizburg and the atmosphere was amazing. A quick blow of the traditional Canon and we were away with all the other internationals and South African Paddlers in B batch for the sprint to the famous Earnie Pearce weir. We came into the slide in about 8th position and following a clean line we started realing in a few boats ahead of us. Commercial, Mussons and Taxi rapids were all negotiated before the running sections started arriving. Day 1 is notorious for its running sections. First up was a 500m dash at Sewage Farm, before the torture of Campbell Farm and Guinea Fowl (4km each).

Then it was on to technical sections of river at Maze and the famous mission rapid. Our only real bump of the day was here and of course it was where all the cameras were 😂

Further runs at finger neck (500m) and Cabbage Tree (3.2km) meant we were both glad to get back in the boat for the 5km of paddling to the finish at Dusi Bridge. Time to rest up and do it all again tomorrow on day 2, where there is a lot less running. 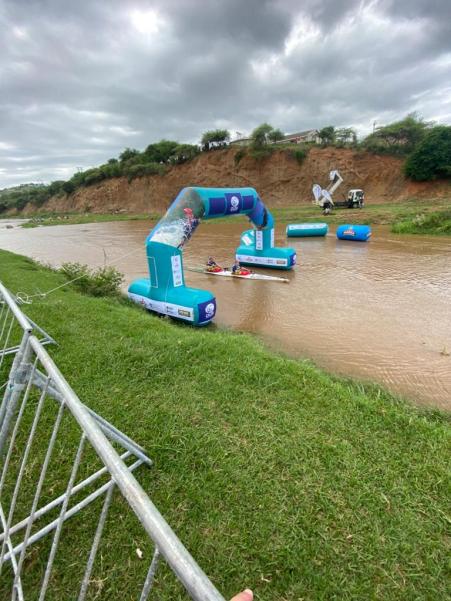 Another super enjoyable day on the river. We aimed to be as consistent as possible from the outset. Beautiful paddle through confluence and washing machine, but then at gauging weir we bent our rudder BAD. Not want you want on this river!

With stops at mariana foley and numgeni portage to straighten it out, we set off again and nailed the big three of gumtree, tombi and hippo.. Unfortunately the rudder bent again at hippo so another stop after and at ufolus store again.. The fifth and final stop was at the head of the dam, where we met our super seconding team, who got us sorted for the burst across the dam.

We pulled hard and pretty much caught all those who has passed us while repairing which kept us in the 56th position..

All in all a really good day on the river and looking forward to the sprint into Durban tomorrow.

An A batch start meant a very fast sprint across inanda dam. We led the second group into the get out and jumped out smooth. Some naivity perhaps on our part led to a couple of crews getting by us on the run, but we got in smooth and set off down Tops Needle with no issues.

Water levels were lovely and we flew down to the quick portage around molweni. Island was the rapid everyone was talking about, but having got some steller advise from past winners, we negotiated the left channel with no issues, bar a brief Eddie out at the very end.

Our new replacement rudder for Day 3 then took another bending at the causeway leading into five fingers. We quickly pulled in and sorted it before bombing down to Pumphouse.

We were both keen to take it on, but similarly were contious of keeping our boat intact with only 12km to go. A unanimous decision made, we ran around and took on our last bottles for the slog to the finish.

We put in a hard grind for as long as we could, but were both feeling it up the final 2/3 km.

At the finish at Blue Lagoon it was some thrill to cross the finish line and well under the 3hours was sweet. A beer never tasted as good following 3 days of steady racing.

Thanks so much to everyone who helped us get to SA and to those who we met and paddled with while on our 7 day stay. We will be back.. (at some stage) 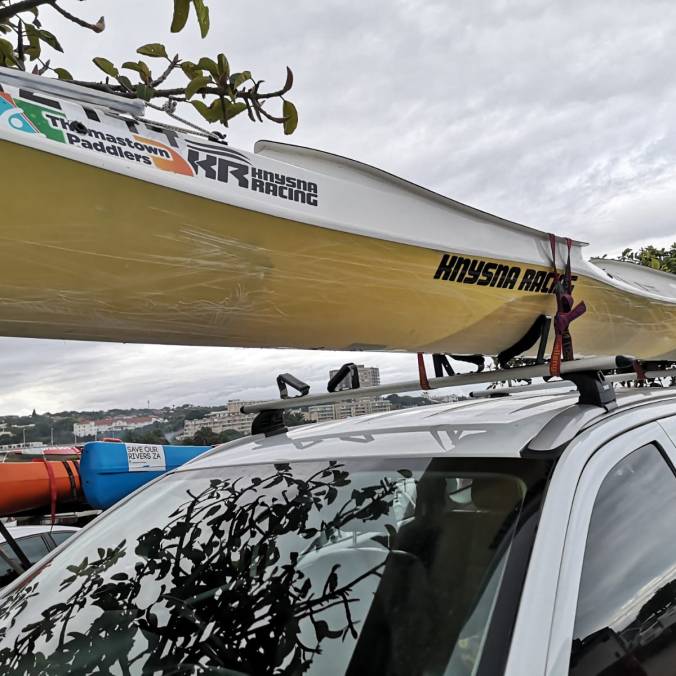